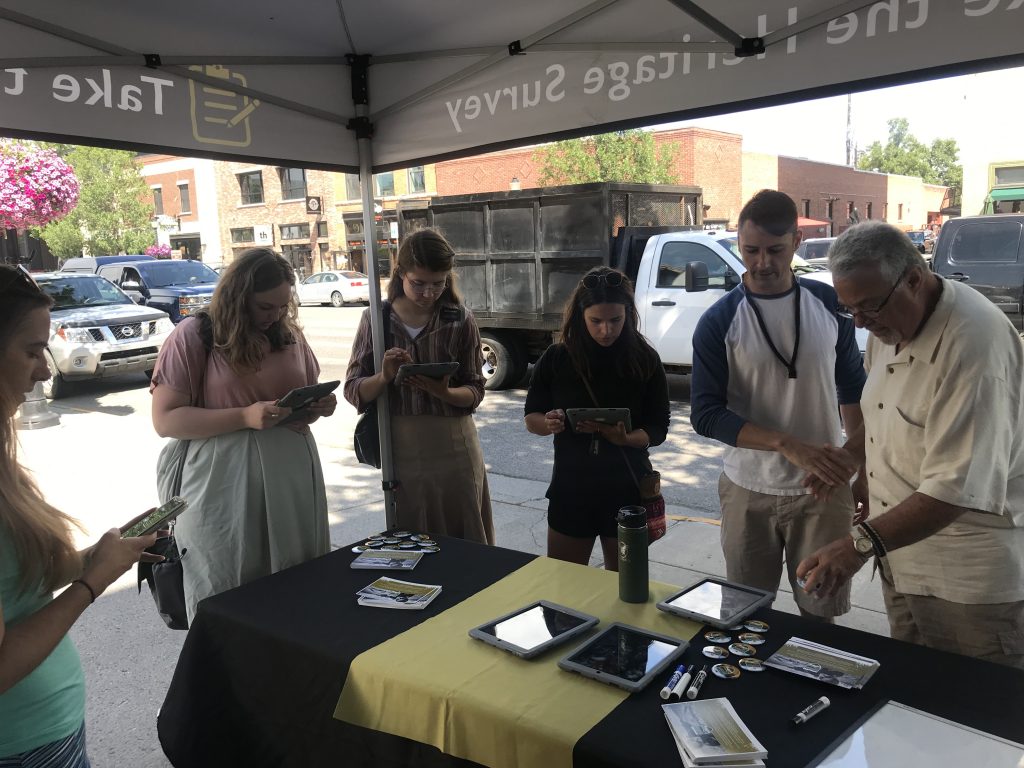 Outdoor Heritage Project has reached more than 7,500 people so far

“What do you mean by outdoor heritage?” asks a man taking the Montana Outdoor Heritage Survey outside Chalet Sports on Main Street in Bozeman on a warm July afternoon.

“What do Montana’s outdoors mean to you? What do you like to do outside and how do you connect with it?” answers Ross Prosperi, field director of Montana Conservation Voters Education Fund, who is manning the table.

It’s a big question: What is Montana’s Outdoor Heritage?

The answer differs from person to person. It can be a big idea, like stewardship. It can be personal. It can be an action, like hunting or fishing or skiing. The outdoors means something different to everybody.

That’s why the Montana Outdoor Heritage Project is trying to reach 10,000 Montanans this summer; to prioritize how Montanans connect to the outdoors, and how best to protect those experiences for future generations.

This summer, Prosperi has led a team of Montana-based canvassers to communities across Montana, going door-to-door, setting up tables at events like farmer’s markets and asking people their opinions. Because of that, it’s been a different experience than many canvassing efforts in the past. Instead of trying to sell an idea or preach to the choir, the canvassers are out there asking people what their experience is, what they like to do outside, and how they would prioritize new investments that go to outdoor programs.

“People are engaging with the survey. They’re fully engaged,” Prosperi said. “It’s just a whole new canvassing experience for me.”

And with Montana facing tens of millions of dollars in shortfalls for outdoor recreation infrastructure, working lands conservation, wildlife conservation and state parks, no matter what Montanans like to do outside, there is likely something respondents are passionate about, Prosperi said.

By asking people to express their opinion, they’re immediately disarmed,” he said. “There is no reason anyone gets disengaged. The survey gives them ownership over the campaign, over what we eventually come up with, as far as a means to our end goal, which is taking better care of our outdoor heritage.”

Overall, Prosperi said the vast majority of people are saying they would be OK with finding more resources to better invest in successful programs that conserve Montana’s outdoors.

Rebecca Old Elk, campaign coordinator for Western Native Voice, a Billings-based nonprofit working to amplify the voices of Native Americans across Montana, is helping coordinate the outreach to Native communities.

“The mission of Western Native Voice is to work and advocate for Native populations. The only way for us to do that is to understand and talk to people. We need to engage them, have them speak out and then you need someone to record it, which is why I’m here,” Old Elk, a member of the Crow tribe, said.

Western Native Voice plans to have a community organizer at every reservation in the state. The organizers are directly from the community they’re working in to ensure that people feel comfortable.

“Often, I think when we ask about heritage people are thinking traditional values, traditional uses of the land, but we’re trying to discuss this concept of an outdoor heritage for Montana itself,” Old Elk said. “In my eyes, it’s the connections to the outdoors for someone who loves to go out and ATV, hike, or fly fish.

Old Elk said much of the conversation when it comes to shared things like public lands and water comes down to how you use the land and that’s an important conversation everyone should be having.

Throughout the afternoon in Bozeman, a couple dozen people take the survey. They say what the outdoors means to them and the threats they face.

“Climate change should be higher,” said one woman.

“Knapweed. We have to do something about knapweed,” said another woman, who has horses on a ranch outside Bozeman.

“We don’t need to protect houses from wildfires. They shouldn’t be building there in the first place,” said another man.

Prosperi thanks each of them, repeating some iteration of one of his favorite sayings about the project.

“It sounds like you have a strong opinion about this. We’d love for you to express your opinions on our survey so we can collect it,” he said.